My research deals with the aural culture of the Bible: the text itself and the artefacts of preaching, reading, praying, and singing associated with it. The aim has been to create sound compositions (some of which are abstract in character while others are more musical) based upon these sources. The Biblical Record is the third CD release in The Aural Bible series. The previous two releases ­– ​R R B V E Ǝ T N Ƨ O A (2015) and The Bible in Translation (2016) – dealt with a repaired wax cylinder recording of a charismatic religious revivalist preaching in 1905, and the Exodus narrative of Moses and the Israelites at Mount Sinai, respectively. This third instalment addresses the entire biblical text. The compositions illuminate both the spoken word of Scripture through the application of the same, and the contexts within which it has been used and, in this case, encoded aurally.

In 1964 the American film, theatre, TV, and voice actor Alexander Scourby (1913–85) recorded all sixty-six books of the Authorized Version of the Bible. His reading was the first complete acoustic capture of the Scripture ever attempted. The recording was produced by the American Foundation for the Blind for their The Talking Book series, which aimed to give unsighted people access to important works of literature. The Talking Bible was released as five volumes of 10-inch, long-playing records, running at 16⅔ rpm. The sixty-seven records represent almost 170 hours of spoken text. The endeavour was all the more astonishing for having been completed in just one month. 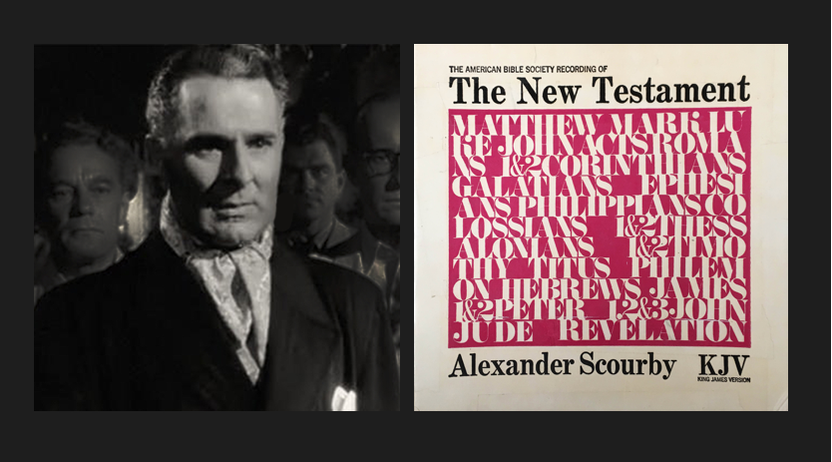 In 2017 I obtained a rare complete set of the original discs. The challenge that confronted me at the outset was that of casting the whole Bible into the relatively small mould of a CD, in order to produce a series of sound compositions that were constrained and shaped by a delimiting set of ideas. To that end, I imposed thematic strictures on the source. These were determined by not only the text’s content but also the nature of the recording: its origin and intent, historical context, culture of listening, and associated apparatus for sound production.

To this end, the compositions are informed by concepts and processes related to: the commission and purpose of the recordings (a provision for the needs of the blind); some of the principal political, social, and scientific events that took place during the month of the recording (nuclear tests, race riots and Civil Rights demonstrations, and the launch of the Ranger 7 probe, which took the first close-up pictures of the moon); an inventory of listening by two previous owners of the record set (Beth and Bill from the USA); and the mechanics and machinery of vinyl recording and playback, as well as the intrinsic qualities and deficits of the medium (imperfections in the pressing and scratches and other blemishes that have accrued over time and through use). In this way, a text that was written thousands of years ago, a technology of audio recording that is over 140 years old, a recording that was made over half a century ago, and a contemporary creative intervention in all three histories, interpenetrate.

The sixteen tracks, bases on a digitized version of The Talking Bible, incorporate all of Scourby’s reading, in one way or another. (For example, the drones that undergird compositions – such as ‘God Breathed’, ‘The Lesser Light’, and ‘Wisdom is Better than Weapons of War’ – include a composite track made up of all the sounds of all the discs’ sides superimposed.) The compositional material is taken from the content of the discs only; that is to say, the encoded voice and surface noise. Samples from the digitized version of the discs were subjected to processes, variously, of splitting and splicing, overlaying, amplifying, compressing, distorting, reversing, temporal stretching and contraction, and looping. Prior to conversion, the discs were manipulated using DJ analogue turntables in order to fabricate processed renderings of the same. Post-digitization, some of the renderings were further developed on virtual DJ turntables in conjunction with digital effects devices. The mode of compositional construction is essentially collagist in nature. Samples are inserted, stacked, shunted, and overlaid within a Digital Audio Workstation environment and, in some cases, also assigned to sampler launch pads for use in live performance. 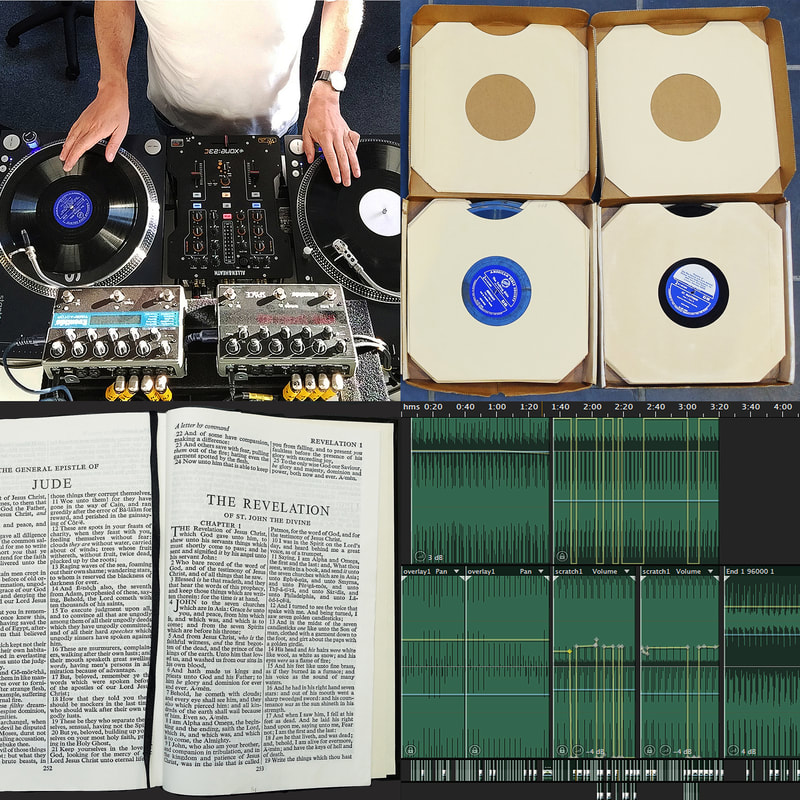 Scourby’s reading is an interpretative act. He animates the characters, vivifies the scenes, and exploits the cadences of the text to produce an immediate, comprehensible, and emotionally charged auditory experience. The album’s compositions further this endeavour. Their timbre, dynamics, and textures summon, furthermore, a certain type of space, presence, mood, movement, and surface associated with aspects of the text’s semantic content. As such, they are evocative rather than expository settings of the Scripture. Inasmuch as all the compositions feature the human voice (heard either comprehensibly or anamorphically), they may be considered songs. The compositions are like music in other respects too. For example, a percussive accompaniment – derived from scratches and tone-arm drops upon the surface of the discs – drives the tracks forward with a sense of, variously, urgency, stateliness, foreboding, and relentlessness that intensifies the narrative’s drama. (The discs’ surface noises represent an auditory patina, which is as much a part of the character of the recording as the voice in the grooves.) Scourby’s delivery possesses an intrinsic lyricism and sonority; his voice covers a wide range of tonalities. This musical quality is all the more evident when words and phrases are isolated and looped. 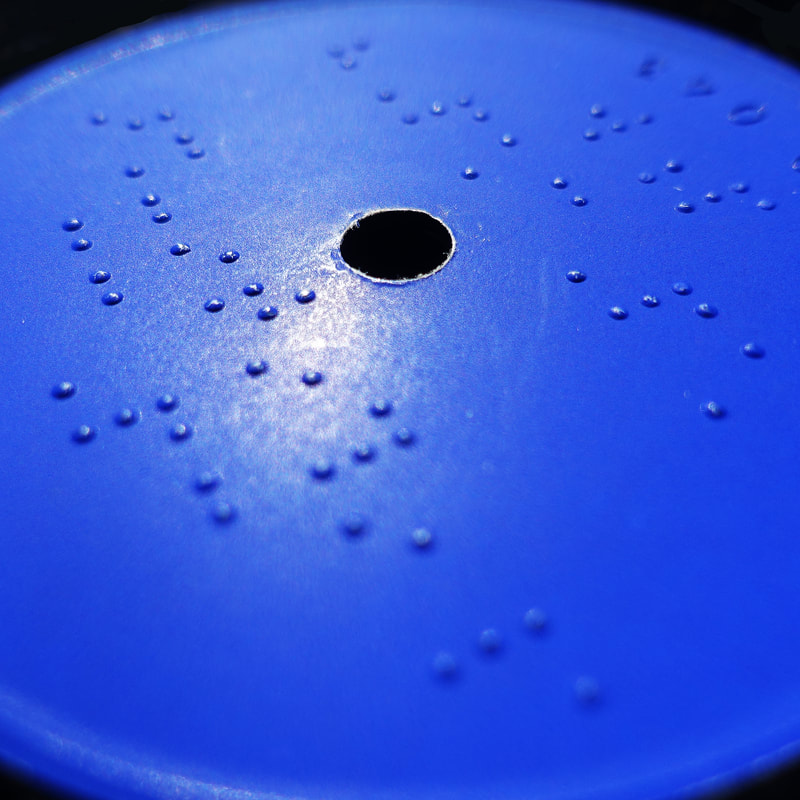 The compositions are based on biblical texts that either directly or tangentially reference the governing themes of the album (see above). In adapting the Scripture a number of different approaches have been employed. The compositions that address the theme of blindness (tracks 2 to 7) interleave accounts of the same story (following the scholarly method of exegetical cross-referencing) derived from different Gospels and the Acts of the Apostles. In ‘Blind, Blind, Blind’ and ‘The Lesser Light’ every instance of the same word (‘blind’ and ‘moon’, respectively) has been extracted from the Bible and arranged in the order in which they occur. The text for ‘That One Day’ is constructed from individual, and pairs of sequential, words to create phrases that do not occur in Scripture. ‘Beth & Bill’ comprises, in part, the spoken titles of books, chapters, and verses – features that are native to the printed Bible rather than to the original manuscripts. Parts only of words ­– the sibilant elements, and the inhalation and exhalation of breath at the beginning and end of speech ­– contribute to the backdrop of ‘God Breathed’. In ‘Write the Vision and Make It Plain upon Tables’, the text is represented by the sound of its inscription. 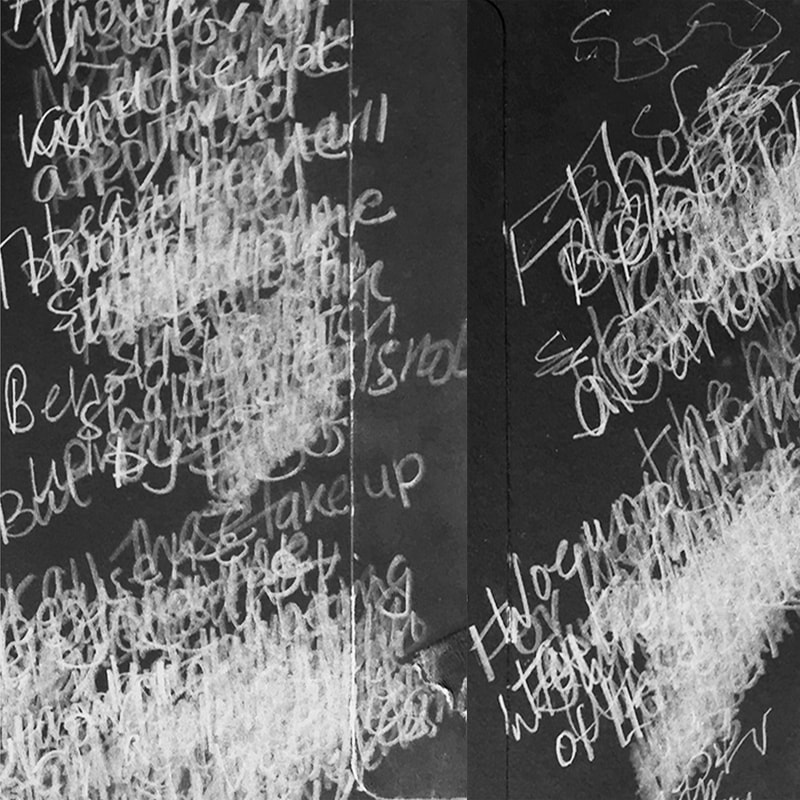 There is a league to be travelled by sound-art practice, music, theology, and biblical studies in the direction of exploring the Scripture’s sonic character and potential. Just as the imagery and visuality of the Bible has spawned a tradition of representation and scholarship in Western art, so those sounds can inspire an afterlife too. The Bible is a record. And not just in the historical sense. Within the grooves of its pages are – encoded in description, simile, and metaphor – noises and voices that sit silently until they are read, as well narratives and concepts that can just as readily be translated into sounds as images. Thus, just as we enter the Bible through our eyes, so the Bible may enter us through our ears. Through reviving and interpreting the sonorities and acoustic potential of the Scripture, the separation between the ancient text and our experiences today is bridged.

​The Biblical Record is the third release in the The Aural Bible series. The series deals with the Judaeo-Christian scriptures as the written, spoken, and heard word. It explores the cultural articulations and adaptations of the Bible within the Protestant tradition. The works on the album embark upon a critical, responsive, and interpretive intervention with aspects of its sound culture. The websites that accompany the series’ CD albums are dynamic. Material will be added, and sub-sections fleshed-out, as opportunities for the work to be presented, discussed, reviewed, and broadcast present themselves.


​
Throughout the site, text is pink indicates a hyperlink.