Description
The piece is based upon the textual material that accompanied the box set of records that I had purchased for the CD project. It was written by Beth and Bill – two of the set’s previous owners. They lived in America. The pair were in possession of, and listened to the records, between October 1994 and November 1996, in two places: their home and what they refer to as ‘School House’.
​ 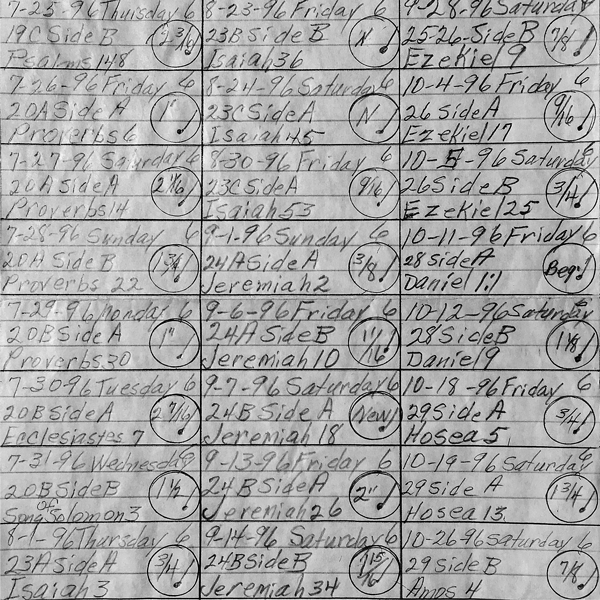 The composition deals with the couple’s inventory of listening from 24 July to 15 November 1996. The chapters that they auditioned all derive from the Old Testament, and the major and minor prophets mostly; while the remainder refer to the Psalms, Proverbs, Ecclesiastes, and the Song of Solomon.

The inventory lists the dates on which the records were played, the chapters, and the number and side of the record on which they could be found. The precise location of the chapter on the side is expressed as a schematic in inches measured in sixteenths from the perimeter of the disc; there are no track divisions. Some of the annotations are not decodable: for example, the ‘6’ that followed every date. ‘N’ indicates that the chapter they were listening to occurs at the beginning of the side.

The sonic material for the composition, like the content of Beth and Bill’s inventory, consists of Scourby’s introductory announcements at beginning of a records’ side regarding his and the set’s commissioner’s name, the version of Bible that he is reading, and the number of records a particular reading covered.

The sonic material also includes a digital recording of all the chapters that the couple had listened to during the period of the inventory – over two hours of material – compressed into 15 minutes by speeding up the source. This is the duration of one side of a 10-inch record (the same diameter as The Talking Bible discs) played at 33 rpm. The accelerated version was cut to one side of a vinyl record to facilitate manipulation on a DJ turntable. Samples from his process were incorporated into the composition. The samples, along with others derived from those parts of The Talking Bible that Beth and Bill had referred to, were stored and played on a digital sampler. Stylistically, the samples are sometimes fractured, incomplete, discontinuous, and segregated. The couple’s information about the biblical books, chapters, and so forth, is presented in the same order as they were entered in the inventory.

King Solomon made himself a chariot of the wood of Lebanon. He made the pillars thereof of silver

the midst thereof being paved with love

for the daughters of Jerusalem